“The Tower on the Hill”

Florida’s Capitol building dominates the Tallahassee skyline. At 22 stories, our hilltop Capitol is by far the tallest building in town. Despite its somewhat unpopular architecture, the building is one of the most identifiable images associated with our city. The Capitol is a symbol for many things – power, government and design by committee to name a few, but for me it represents Tallahassee’s ability to evolve over time.

This week, in a conference room with a clear view of the Capitol, our staff hosted over twenty former Chairs of the Chamber Board for a meal and some reflective conversation. Led by our immediate past chair, Heidi Otway, the discussions began with a round-the-table story telling session. Heidi asked each former Chair to describe the challenges they faced while leading our Chamber. To hear tales of our organization working diligently for decades to grow the community was inspiring. The various issues and obstacles through the years involved everything from our schools, to roads, local officials, higher education and even the recruitment of companies to town.

As our former chairs traded stories, there was a mixture of both laughter and concern as we took an accounting of both the success and failure of our long history as a Chamber of Commerce. Of all of those stories however, one stood out to me. It was told by Dubose Ausley as he reflected on that tumultuous time when there was strong consideration of moving the Capital south. Mr. Ausley described that era, how our community persevered through it and the need for Tallahassee to keep evolving. I found great comfort in his words as well as the heads nodding from the many leaders around the table.

For those who may not have experienced what Tallahassee was like before the “new” Capitol was constructed, let me take you back to 1970. In the years between doo-wop and disco, Tallahassee was a small but growing city. As the debate began to rage about moving the Capital to some city further south, Tallahassee was home to a mere 72,624 people. The tallest building in town was Smith Hall on FSU’s campus and the aging original Capitol building was bursting at the seams. With mounting pressure to create a more modern home for government, deals were made to keep Tallahassee as the Capital and build new buildings for our elected leaders to occupy.

Tallahassee had to evolve in order to remain the Capital City. That meant giving up a few things along the way. In the physical sense, there was the demolition of an entire city block between Jefferson and St. Augustine Streets. Portions of Adams Street were condemned as well in order to accommodate the growing Capitol complex. There was also a need to give up certain elements of our small-town existence. Choices had to be made so that our community could continue to grow and thrive. As the new Capitol tower rose above the once sleepy downtown, the stature of our community rose along with it. 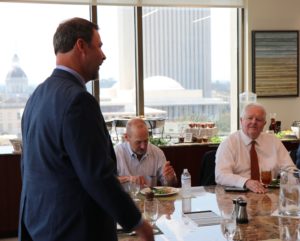 Since 1970, the population of Tallahassee has grown by 166%. That’s double plus half and the numbers are still climbing. There are many who like to argue about whether that is good, but can you imagine if things had gone the other way? That brings me to today – Tallahassee once again has choices to make about our future. We are three and a half years away from celebrating the 200th anniversary of our founding as the Capital City and as we prepare to enter a new century, we once again find ourselves facing the choice of what direction we should move in.

Our Capitol, the tower on the hill, is a reminder of why we must keep changing. There is no way to know what the next monument to our continued evolution as a city may be, but you should know this – the Chamber is always thinking about the future. We had business leaders who thought about it in 1970 and we have a new generation of leaders thinking about it now. As debates heat up about how our community should grow, the Chamber, our leadership and more than 1,400 members are hard at work to make sure we continue to evolve into a place where people want to live and companies want to operate. The desire to grow our community is the foundation of our organization and the work to ensure that happens is the basis for why we exist. Times change and Tallahassee will too. Regardless of where we go from here – the Chamber and those who support growth will be there to weigh in.

“We are trying to get an online presence with our new business so I've been googling "Welcome Home Concierge Services" to see what comes up. I was so excited to see our business come up on google through the Tallahassee Chamber of Commerce! Even better, I was able to get to our website directly from the link! The Chamber is awesome!”