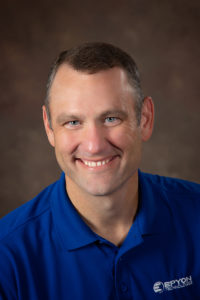 “Nothing great was ever achieved without enthusiasm.”

No words ring truer when describing the dynamic and fast paced President & CEO of Epyon Technologies, Brian Campbell. The confident leader of the “nerd herd” is a full believer that there is simply no challenge that cannot be overcome without teamwork and a desire to win. “I’m not the type of leader that will point the troops over the hill and say the fight is over there, go get ‘em. I prefer to lead with the team, shoulder to shoulder, to achieve our goals.” And Brian and team seem to be well on their way.

Brian’s opportunity as CEO was born out of necessity when the company he was the VP of IT and Internet Operations for nearly 10 years, GTO Access Systems, experienced a massive layoff by the parent company in July 2017. After the shock wore off, Brian began to consider his next move. He went to visit a dear mentor to discuss his options and review his resume, and his mentor advised him to seriously consider working for himself. As luck would have it, another friend introduced Brian to the owner of Epyon Technologies, and it completely fascinated him.

Brian took over as CEO of Epyon in March of 2018; and the following September he and his wife Ali fully purchased the company. Building off the tremendous growth from adding Internet marketing services such as website hosting, search optimization, paid advertising, and similar offerings to their portfolio, Epyon has been able to find a profitable niche between IT and marketing.

While growth and success are top priorities, the day-to-day experience at Epyon is of utmost importance to Brian. Nestled off Beard Street in Midtown, one of Brian’s main priorities is being team leader. “Culture is king”.  With the fresh memory of a painful layoff still on his mind, Brian set and met a goal of providing an atmosphere in which people WANTED to come to work, train, and grow professionally.

As a result of the layoff, a majority of folks from Brian’s team at GTO were available, and most have joined Epyon. His team knows how to manage the IT and Internet Operations at a high-level from their experience running a large-scale operation at GTO. As a result, they bring a different style of client management to the IT and Internet Marketing industries in Tallahassee and the surrounding areas. Friendliness, responsiveness, and next level talent set the team apart from the rest. “We are simply the best managed IT and Internet Marketing company in Tallahassee that not everyone has heard of, and we are just getting started.”

As the first-year anniversary of the new Epyon Technologies approaches, Brian is looking forward to new challenges and continued growth in supporting the needs of businesses in his hometown.

“The Chamber has allowed me to tap into the knowledge base of some of the leading business minds of Tallahassee. Most young businesses incorrectly focus their membership on the amount of sales they get; the wealth of the Chamber lies in the friendships and mentors you gain. This will help grow your business in ways you can’t imagine.”