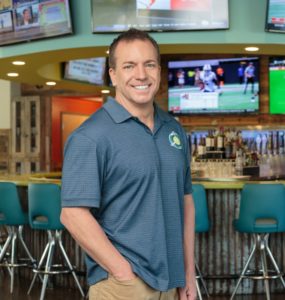 “I had such a narrow view of what was really out there.  When I was growing up, all I thought about was going to college and becoming either an architect or civil engineer. Many of my family members were in one way or another in the construction industry so I just naturally thought my life would somehow end up going down that same path. The irony to all of it is that the two things I said I would never want to do ended up being two of the best decisions I’ve made.” Sam served four years in the Air Force and was part of the first Gulf War in the early 90’s. “I have such fond memories of those years and many of the lessons I learned, became an integral part of the way I do things today as a business owner.”

After graduating from FSU with a degree in business, Sam spent the next 20+ years owning restaurants. It all started with a very young concept called Tropical Smoothie. It was so early on that Sam was actually the first franchisee.  “We have now gone from just being a small smoothie store to becoming a full cafe with a vast menu, opening stores at a blistering pace.” Every 3-4 days, Tropical Smoothie is opening a new location in just about every state.

After 18 years of developing almost 30 stores between Tallahassee and Orlando, Sam decided to sell majority of the locations back to the corporate office and now owns the Timberlane Road location.  It was then that a new opportunity came across Sam’s desk that he couldn’t resist. “The original founder of Tropical Smoothie Cafe came to me about six years ago and told me about a new full service restaurant idea he had. It would be a family sports bar with NO fryers. I thought it was an interesting idea, but wasn’t sure how it would fit the mold in the sports bar market.”

Flash forward to today; Sam has opened up what is one of the busiest restaurants in town. “We have been open for over two years now and I am amazed at how well it was received. I have truly loved the restaurant industry and couldn’t imagine doing anything else.”

“The Tallahassee Chamber of Commerce has always been here serving the business community. I think it’s important for business owners and managers in Tallahassee to really look at all of the new services the Chamber is providing that especially new businesses. The Business Advocacy Committee over the last few years has lead the charge on every major public policy issue the community has faced. With the BAC’s efforts, the business community is on the front end of discussions helping to lead direction and provide facts instead of waiting for things to happen. We owe the Chamber a lot of kudos for their proactive focus.”